Can Buurtzorg save the NHS?

Oil and Water: reflections from research into the introduction of self-management teams in NHS community services

Integrated Care Systems are the future of health and care in England, with a similar emphasis on local system integration in the devolved governments. As ICS leaders look to redesign their local system architecture and enabling organisational support from CCG, CSUs and others, they need to focus afresh on purpose.

In an integrated care system, NHS organisations, in partnership with local councils and others, take collective responsibility for managing resources, delivering NHS standards, and improving the health of the population they serve. Local services can provide better and more joined-up care for patientswhen different organisations work together in this way.

In this blog we focus on the last point: providing better and more joined up care. This has been a long-standing policy issue since 1948 and the separation of personal social care from health care. Periodically the issue rises to the top of the policy agenda. Many things have been tried from formal collaborative planning mechanisms, joint commissioning, better care funds and now ICSs.

These policy levers play with the way planners and managers allocate resources and work together. They can often create the conditions for local professional to work together more closely – though this often seems more a reflection of local relational health and trust than the policy imperatives. Too often frontline care and the experience of people and communities is still of fragmentation and gaps.

One of the emerging and exciting opportunities to fundamentally change services and the experience of care, has emerged from the Netherlands over the last 10 years with the development of the Buurtzorg approach to community nursing. It’s rapidly spread into other public service sectors and now increasing is being adopted in other countries including the UK.

One of the emerging and exciting opportunities to fundamentally change services and the experience of care, has emerged from the Netherlands over the last 10 years with the development of the Buurtzorg approach to community nursing. It’s rapidly spread into other public service sectors and now increasing is being adopted in other countries including the UK.

Oraiozili conducted some research during the summer of 2020 for a dissertation entitled “Oil & Water” which studied how SMT (self-management teams) impact on organizational culture, using as a case study the adoption of the Buurtzorg example as applied in the NHS England & Wales. (Oil and water? Exploring the emerging lessons from application of Buurtzorg self-managing teams in the NHS. Dissertation presented for the Degree of MSc HRM Edinburgh University. 2019-2020 Oraiozili- Eirini Tegou.)

Self-Managing Teams are not new in the NHS per se (See for example ‘Self Managed Integrated Nursing Teams (SMINTS) in West Berkshire Priority Care Service’, 2000, by Anne Owen. AMB, one of the authors was the Trust Chief Executive at the time. SMINTS did not last long in the subsequent NHS reorganisation.) However the Buurtzorg approach has created a whole organisation built around the needs of front-line teams. It has been highly successful. How is it fairing in the NHS, where this wrap around organisation change does not exist?

The oil of bureaucracy?

It does not take long in reviewing the existing literature on management and organizational forms as well as NHS reports to identify that the NHS falls into the ‘bureaucratic’ structure paradigm. This brings typically the dominance of division of labor, superior- subordinate relationships, a strong emphasis on following procedures, and transparency to avoid favoritism. Bureaucracy is an appropriate and legitimate organizational form in many contexts – it is not in itself bad. There are great bureaucracies and not so great ones.

Interviews of nursing and management personnel confirmed the reality of what this looks and feels like in the NHS, even for those involved with SMTs.  The organisations people worked within were clearly ‘structured social forms’ in which direct and indirect interdependencies existed with SMTs. The SMT both influences and is influenced by a mix of organisational structural and interpersonal relationships – especially through the team’s direct line manager.

The main finding from the research was the contrast between the ‘oil’ of the formal bureaucratic form and its requirements with the ‘water’ of the more informal and flexible SMT focused on the needs of their patients.

SMTs aim to develop employee skills through cultivating autonomy, creativity, and resourcefulness. On the contrary, the very construction of bureaucracy has as its goal to restrict flexibility on the altar of rationalism and order.

Τhe interviewees expressed concerns about how leadership ‘above SMTs’ reacted when initiatives came from more junior (though newly empowered) staff and were often “not written in the protocol.”

Leaders were experienced as superficial in their communication with the front-line staff. While the instructions of managers are, in theory, clearly and strictly communicated in the traditional structures of the NHS, the research showed that how leadership is actually exercised is a personal issue, meaning that it remains as a matter for the discretion for each manager. There are leaders who are more compassionate, open to discussion and closer to their subordinates, leaving space for them, and others who are intervening and controlling and insist on the exact procedures to be followed.

The leaders of SMTs and their leaders were often being trained in leading in new ways, to fit the Buurtzorg SMT approach.  However, the whole organisational performance management system was not also changing.

Thus the bureaucratic organisational system performance which assesses managers on the basis of how well their team perform continued as before. The mangers thus have to deal with a delicate balance in decision making between allowing SMTs freedom and managing them tightly to be sure they are ‘delivering’. Furthermore, the temptation was for managers to ‘impose’ workload on lower graded staff [against the tent of a SMT which would sort out its own work distribution]. It was found, in line with expectations from theory, that the lower the individual is in the hierarchy, the easier it is for others to increase their workload. As you go ‘up the organization’, hierarchy matters more and more, and seems to become more solid.

Some interviewed argued that the bureaucracy is linked with the employees’ perception about performance. Some turn to the organisational structure and its policies and procedures: have we followed them? Other focus on did we deliver the right care to meet our patient’s needs? The former process, trying to find the mistake in the policy rather than in the care delivered, also causes an increase to the workload.

The interviewees all wanted like to see more SMTs in the NHS. But they also longed to see and experience a reduction and change of the constraints of the ‘bureaucracy’. They identified that the long-term implementation and success of SMTs will need changes in the systemic culture and ways of traditional working.

Through working in an environment of a SMT, nurses became familiar with technology, and they mastered and developed skills which aim to look at the patient in a holistic way, educating both the patients and their families. They did not act just as providers of medical advice. It is interesting that they believed that as individuals, people would indeed take initiatives regarding decision making if they were given space. In SMT, leaders are responsible for guiding the staff to find the solutions rather than giving them strict instructions and controlling them. Staff are given autonomy and accountability, rather than issues being held and resolved by the management.

So, to truly follow through empowering self-managing teams of community nurses, and other professionals, as part of developing an integrated system, will need recognition of the need for a radically different approach to leadership. This is not just leadership skills and style but the whole ‘leadership system.’ How leaders are developed, supported and evaluated needs to change in line with the self-managing team ethos.

We cannot realistically look to abolish hierarchy. Rather hierarchy could be used as a means of sharing and consolidating shared values and new ways of working which support SMTs. Leaders need to be trained in different ways of practicing and evaluating delivery in the context of the adoption of SMT.

Based on the research study, we propose a self-assessment process which could be introduced by leaders into their regular team meetings. This would help leaders promote dialogue which begins to surface and discuss critical issues around communication and assumptions around work.. However, its goal would not be to be seen as “one extra bureaucratic task to be done”, but a tool towards strengthening the team through manifesting that “we are on the same page”. We believe it will begin what Ronal Heifetz calls ‘adaptive change’. 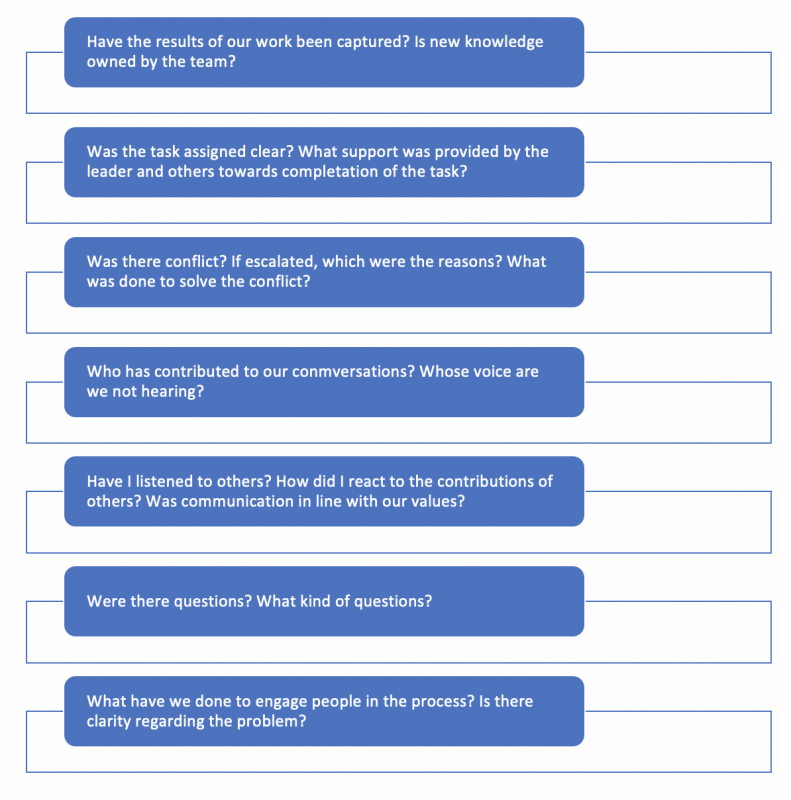 Oil and water – or emulsification?

So can Buurtzorg self-managing teams survive and thrive in the current NHS Trust and Council structures? However great a step forward they will be in delivering joined up care around the needs of people and communities. We believe they only can with a radical and carefully thought through cultural and leadership shift by the ‘host’ Trust and Councils.  Emulsification?